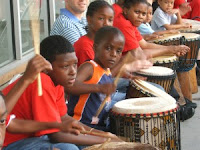 Kuumba Institute invites you to its culminating activity. Come out and see what the kids have been up to on Saturdays. You’ll be pleasantly surprised.
In addition, parents of kids who are registered for the summer program should attend the parent orientation that is scheduled to follow the culminating activity. For more information call (504) 569-9070.
June 6, 2011, 8:30 a.m. – 3:00 p.m.
KUUMBA INSTITUTE SUMMER PROGRAM BEGINS
Ashé Cultural Arts Center | 1724 Oretha Castle Haley Blvd.
(504) 569-9070
The Kuumba Institute’s 7-week summer program begins June 6 and runs through July 22. Kuumba services students ages 6-16, divided into six age groups. Students receive specialized training in Visual Arts, Dance, Martial Arts, Voice, Costume Design, Photography, Poetry, Arts & Crafts, Theater and African Drumming. Students are provided with breakfast, lunch and a snack, daily. In addition to providing our students with various means of artistic expressions in classroom setting, we also expose them to outside field trip and performance experiences. The registration fee is $35 per child. Tuition fees are: $250 for one child; $350 for a family of two children; $450 for a family of three children. After-care is available at an additional cost. Classes are held at Ashé Cultural Arts Center, 1724 Oretha Castle Haley Boulevard in New Orleans. For information, call (504) 569-9070 or come by and fill out an application.
June 10, 2011, 7:00 p.m. (note time change)
NEW ORLEANS LOVING FILM FESTIVAL
Ashé Cultural Arts Center | 1712 Oretha Castle Haley Boulevard
Free

"ONE BIG HAPA FAMILY" – After a realization at a family reunion, half Japanese-Canadian filmmaker, Jeff Chiba Stearns, embarks on a journey of self-discovery to find out why everyone in his Japanese-Canadian family married interracially after his grandparents’ generation. This feature live action and animated documentary explores why almost 100% of all Japanese-Canadians are marrying interracially, the highest out of any other ethnicity in Canada, and how their mixed children perceive their unique multiracial identities. (85 minutes) A short discussion with award winning filmmaker, Jeff Chiba Stearns, will follow the screening.
Also Screening: "SOMETHING OTHER THAN OTHER" -- Filmmakers Jerry Henry and Andrea Chia started to film a video diary on the day they found out that she was pregnant. As the parents of a multiracial child they examine racial identity in this experimental personal documentary. They filmed Quin‚s birth in an unconventional way - instead of using video, they decided to shoot it on Super 8mm and to shoot it frame-by-frame, like an animation. New parents Jerry and Andrea have endured their own share of discrimination growing up. They hope their newborn son can grow up identifying as something other than "other." (7 minutes)
Co-presented by Charitable Film Network, Press Street / Antenna, the New Orleans Film Society, and Ashé Cultural Arts Center.
June 11, 2011, 4:30 p.m.
NATIONAL CONFERENCE OF ARTISTS
Ashé Cultural Arts Center | 1724 Oretha Castle Haley Blvd.
Regular meeting of the organization. Open to members only.
June 13, 2011, 6:00 p.m.
FREEDOM PREPARATORY ACADEMY
Ashé Cultural Arts Center | 1712 Oretha Castle Haley Blvd.
Dinner and Show.
By invitation.