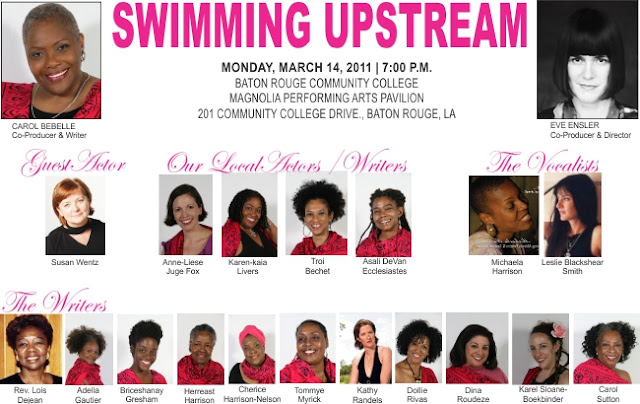 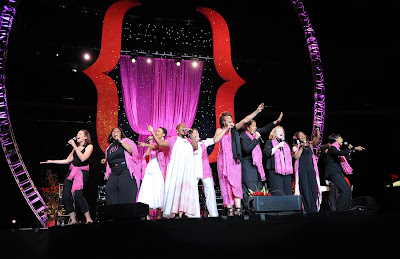 TICKETS ARE ON SALE NOW!
BATON ROUGE
Monday, March 14, 2011 at 7:00 p.m.
Baton Rouge Community College - Magnolia Performing Arts Pavilion
201 Community College Drive, Baton Rouge, Louisiana
FREE ADMISSION - OPEN TO THE PUBLIC
For more information, call 504.569.9070.
SANTA FE
Friday, March 18, 2011 at 7:00 p.m.
Lensic Performing Arts Center
Tickets:  $25
Tickets by phone:  505.988.1234
http://www.ticketssantafe.org/tsf/event_calendar/detail/577
HOUSTON
Monday, March 21, 2011 at 7:30 p.m.
Alley Theater - Neuhaus Stage
Tickets:  $25
Tickets by phone:  713.220.5700
http://www.AlleyTheatre.org/SwimmingUpstream
ABOUT THE PRODUCTION
Five years after Hurricane Katrina devastated the Gulf South, V-Day, the global activist movement to end violence against women and girls, in partnership with Ashé Cultural Arts Center, will present a special performance of Swimming Upstream at the Magnolia Performing Arts Pavilion on the campus of Baton Rouge Community College.  It is a stunning piece of theater telling stories of the storm and those who survived.V-Day and Ashé Cultural Arts Center pay tribute to the women of New Orleans and the Gulf South. Written by 16 New Orleans’ women, Swimming Upstream is a powerful theatrical production that tells the soulful stories of women who lived through Hurricanes Katrina and Rita with grace, rage and great resiliency, punctuated by a flair for story telling, humor and music that comes from being New Orleanian.  Swimming Upstream is A Testimony, A Prayer, A Hallelujah, An Incantation. The performance will feature the full New Orleanian cast of Anne-Liese Juge Fox, Karen-kaia Livers, Troi Bechet, Asali DeVan Ecclesiastes and Susan Wentz and singers, Michaela Harrison and Leslie Blackshear Smith.
The Atlanta Journal-Constitution calls Swimming Upstream “the poetic equivalent of a breached levee. What begins as a flood of raw human emotion becomes a source of healing, transcendence and new beginnings." Variety says Swimming Upstream “resembles an engaging church event – complete with gospel songs, testimonies and hand-clapping redemption.”
As a city of what was once 500,000 struggles to rebuild, the rest of the country have probably forgotten the brown water line that still stains homes, stores, and churches. Many have forgotten the thousands who lived through the terror of leaving their homes, the hours of waiting outside in the rain, the nightmare of the Superdome, the one wet blanket to sleep on amid the masses, the lack of food and water, and the fear of rape in the bathrooms. To document those incidents, for a year and a half following Hurricanes Katrina and Rita, 16 women from New Orleans— including a gospel singer, a teenage filmmaker, a former Vegas showgirl, and a Mardi Gras Indian matriarch—met monthly to share stories and develop original writings about their experiences before, during, and after the storms.
In a process facilitated by playwright and activist Eve Ensler (The Vagina Monologues) and Carol Bebelle, Executive Director and Co-founder of Ashé Cultural Arts Center, the writers crafted a powerful theatrical production that tells the raw and soulful stories of women who lived through Hurricanes Katrina and Rita with grace, rage, humor, strength and great resiliency. “Women kept New Orleans together. Through love, through sheer ingenuity, they kept New Orleans moving forward,” said Eve Ensler, V-Day Founder and playwright.
Premiering at the Louisiana Superdome in April 2008 during V-Day’s “V to the Tenth” celebration, and with subsequent shows in Atlanta, New Orleans, and most recently at the world famous Apollo Theater in Harlem, New York, Swimming Upstream has played before rapt audiences with casts featuring writers of the play, native New Orleans performers, Liz Mikel from Dallas; and celebrity guest stars, including Jasmine Guy, Shirley Knight, LaChanze, Phylicia Rashad, Anna Deavere Smith, and Kerry Washington.
The cast will now include five of the New Orleans writers and two New Orleans singers. Via monologue, poetry, and song, the production amplifies the seldom-heard voices from the ground, sharing the frustration and hopes that New Orleanians felt during one of the United States’ most tragic moments. The piece also illuminates the intersectionality of the larger American experience – posing important questions about how race, class and gender are tightly intertwined, and how they determine how we as Americans experience our society.
The writers who captured these stories for stage-life are Carol Bebelle, Troi Bechet, Reverend Lois Dejean, Asali DeVan Ecclesiastes, Anne-Liese Juge Fox, Adella Gautier, Briceshanay Gresham, Herreast Harrison, Karen-kaia Livers, Tommye Myrick, Cherice Harrison Nelson, Kathy Randels, Dollie Rivas, Dina Roudeze, Karel Sloane-Boekbinder and Carol Sutton.
ABOUT ASHE CULTURAL ARTS CENTER
The mission of the Ashé Cultural Arts Center, (Ashé) an Initiative of Efforts of Grace, Inc. is to promote, produce, create and support programs, activities and creative works that emphasize the positive contributions of people of African descent. The Ashé Cultural Arts Center has been a key institution in the revitalization and rebuilding of New Orleans in the wake of hurricanes Katrina and Rita and the subsequent levee failures and has partnered with many organizations focusing on community development. Ashé Cultural Arts Center was co-founded by Carol Bebelle (executive director) and Douglas Redd.   http://www.ashecac.org/
ABOUT V-DAY
V-Day is a global movement to end violence against women and girls that raises funds and awareness through benefit productions of Playwright/Founder Eve Ensler’s award winning play The Vagina Monologues. To date, the V-Day movement has raised over $80 million and educated millions about the issue of violence against women and the efforts to end it, crafted international educational, media and PSA campaigns, launched the Karama program in the Middle East, reopened shelters, and funded over 12,000 community-based anti-violence programs and safe houses in Democratic Republic Of Congo, Haiti, Kenya, South Dakota, Egypt and Iraq. The ‘V’ in V-Day stands for Victory, Valentine and Vagina. http://www.vday.org/