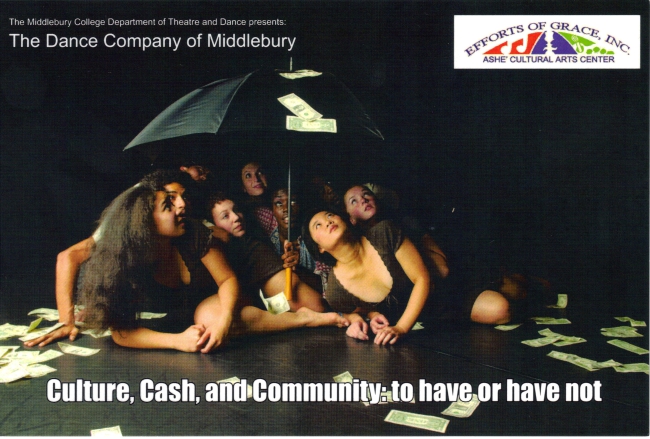 Performs Culture, Cash, and Community:  To Have or Have Not

Community Class
Thursday, January 27, 2011
6:00 - 8:00 p.m.
Open to everyone.
______________________________________________
ABOUT THE COMPANY
The Middlebury College Department of Theater and Dance presents The Dance Company of Middlebury (Vermont) with its exciting production “Culture, Cash and Community: to have or have not.” The production is choreographed by Christal Brown, Paloma McGregor, Trebian Pollard and the company. Dancers include Sonia Hsieh Catherine Miller, Jessica Lee, James Moore, Christian Morel and Hannah Pierce. Call (504) 569-9070 for reservations.


Performances Will Tour New Orleans After Opening in Middlebury


Middlebury, VT—The 2011 Dance Company of Middlebury presents “Culture, Cash, and Community: To Have or Have Not,” on January 21 and 22 at the Mahaney Center for the Arts. With artistic direction by visiting lecturer in dance Christal Brown, the Company has created a concert of four premieres exploring issues of wealth and class as manifested in culture.


Company members will be trained in a variety of movement techniques, choreographic tools, and community facilitation techniques. They will also develop their own awareness of their own communities, and their personal relationships to race, class, gender, privilege, and place.


After the performances in Middlebury, the Company will travel to New Orleans’s Seventh Ward for a week of community engagement through dance and music. Female Company members will be trained in the facilitation of “Project: BECOMING,” a community engagement curriculum developed for teen girls by INSPIRIT, a dance company. Male Company members will present a workshop for teen males entitled “What’s Your Story,” led by rap artist Nova the Camillion, focusing on developing personal narratives through the mediums of hip hop and zydeco. Company members will work alongside members of the Seventh Ward Community Center and Ashé Cultural Arts Center to present these workshops. They will also attend a workshop with The People’s Institute for Undoing Racism to enhance their skills as facilitators and their understanding of the intersections of race, class, and community.


Artistic Director Christal Brown is a native of Kinston, North Carolina and received her BFA in dance and minor in Business from the University of North Carolina at Greensboro. She has toured nationally and internationally with Chuck Davis’ African-American Dance Ensemble, Andrea E. Woods/Souloworks, Gesel Mason Performance Projects, Liz Lerman Dance Exchange, and Bill T Jones/Arnie Zane Dance Company. She spent three seasons with the Urban Bush Women, a groundbreaking American dance company founded on the energy, vitality, and boldness of the African American community. Brown is the Founding and Executive Director of INSPIRIT, a performance ensemble and educational conglomerate dedicated to bringing female choreographers together to collaborate and show new work, expanding the views of women of all ages, and being a constant source of inspiration to its audience and members. Brown has been a resident artist of Dance New Amsterdam, Movement Research, and Tribeca Performing Arts Center, and is currently Visiting Lecturer in Dance at Middlebury College.