SWIMMING UPSTREAM! From the Big Easy to the Big Apple 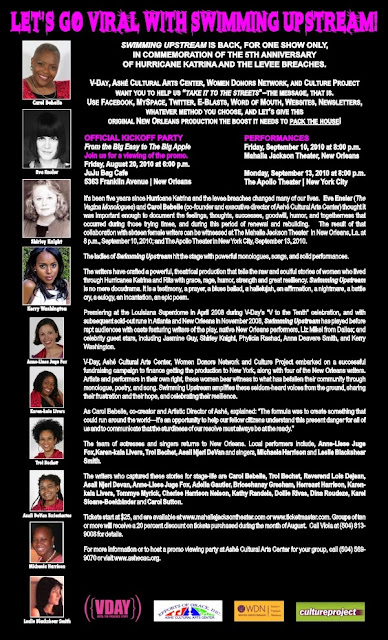 SWIMMING UPSTREAM IS BACK, FOR ONE SHOW ONLY, IN COMMEMORATION OF THE 5TH ANNIVERSARY OF HURRICANE KATRINA AND THE LEVEE BREACHES.

V-Day, Ashé Cultural Arts Center, Women Donors Network, and Culture Project want you to help us “take it to the streets”--the message, that is. Use Facebook, MySpace, Twitter, E-Blasts, Word of Mouth, Websites, Newsletters, whatever method you choose, and let’s give this original New Orleans production the boost it needs to pack the house!

OFFICIAL KICKOFF PARTY
From the Big Easy to The Big Apple
Join us for a viewing of the promo.
Friday, August 20, 2010 at 6:00 p.m.
JuJu Bag Cafe
5363 Franklin Avenue
New Orleans

It's been five years since Hurricane Katrina and the levee breaches changed many of our lives. Eve Ensler (The Vagina Monologues) and Carol Bebelle (co-founder and executive director of Ashé Cultural Arts Center) thought it was important enough to document the feelings, thoughts, successes, goodwill, humor, and togetherness that occurred during those trying times, and during this period of renewal and rebuilding. The result of that collaboration with sixteen female writers can be witnessed at The Mahalia Jackson Theater in New Orleans, La. at 8 p.m., September 10, 2010; and The Apollo Theater in New York City, September 13, 2010.

The ladies of Swimming Upstream hit the stage with powerful monologues, songs, and solid performances.

The writers have crafted a powerful, theatrical production that tells the raw and soulful stories of women who lived through Hurricanes Katrina and Rita with grace, rage, humor, strength and great resiliency. Swimming Upstream is no mere docudrama. It is a testimony, a prayer, a blues ballad, a hallelujah, an affirmation, a nightmare, a battle cry, a eulogy, an incantation, an epic poem.

Premiering at the Louisiana Superdome in April 2008 during V-Day's “V to the Tenth” celebration, and with subsequent sold-out runs in Atlanta and New Orleans in November 2008, Swimming Upstream has played before rapt audiences with casts featuring writers of the play, native New Orleans performers, Liz Mikel from Dallas; and celebrity guest stars, including Jasmine Guy, Shirley Knight, Phylicia Rashad, Anna Deavere Smith, and Kerry Washington.

V-Day, Ashé Cultural Arts Center, Women Donors Network and Culture Project embarked on a successful fundraising campaign to finance getting the production to New York, along with four of the New Orleans writers. Artists and performers in their own right, these women bear witness to what has befallen their community through monologue, poetry, and song. Swimming Upstream amplifies these seldom-heard voices from the ground, sharing their frustration and their hope, and celebrating their resilience.

As Carol Bebelle, co-creator and Artistic Director of Ashé, explained: “The formula was to create something that could run around the world—it's an opportunity to help our fellow citizens understand this present danger for all of us and to communicate that the sturdiness of our resolve must always be at the ready.” 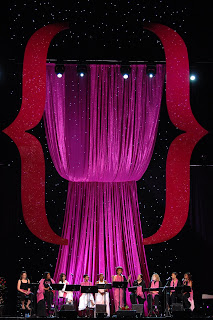 Tickets start at $25, and are available at www.mahaliajacksontheater.com or www.ticketmaster.com. Groups of ten or more will receive a 20 percent discount on tickets purchased during the month of August. Call Viola at (504) 813-9008 for details.

For more information or to host a promo viewing party at Ashé Cultural Arts Center for your group, call (504) 569-9070.