Locals and Essence Music Festival visitors are invited to join Ashé Cultural Arts Center and its sponsors in commemorating the Tenth Annual Maafa in New Orleans. 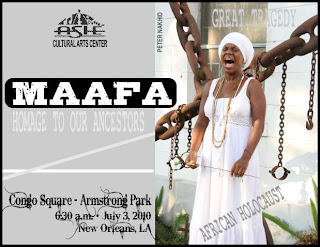 At sunrise on Saturday, July 3, 2010, hundreds of people attired in white clothing will gather in Congo Square at Louis Armstrong Park to honor African ancestors who died during the Middle Passage—a period that brought millions of captured Africans from Africa to the Americas where they would be used as a labor force, be persecuted, beaten, and separated from their families forever. This great tragedy is known as the Maafa, a Kiswahili word that means “horrific tragedy.” The year 2010 marks the 10th Anniversary of the commemoration in New Orleans. Ashé Cultural Arts Center’s founders Carol Bebelle and Douglas Redd, engaged by Leia Lewis, who coordinated the first Maafa celebration, joined the other similar celebrations around the country. The vision for the Maafa commemoration continued to grow and was influenced by the work of St. Paul Baptist Church in Brooklyn, then led by New Orleans-born Rev. Johnnie Ray Youngblood, where annually a month-long series of activities form the Maafa commemoration there.


Drummers from Venezuela, Nigeria and New Orleans will lead the procession from Congo Square through historic Tremé, with brief stops at the Backstreet Museum and St. Augustine Catholic Church, the site of the Tomb of the Unknown Slave. From there, the procession continues through the French Quarter, with stops at Café Maspero and the Royal Orleans Hotel, where slave auctions regularly took place. One of the highlights of Maafa 2010 will happen aboard the Canal Street Ferry. On board, a sacred ceremony will take place. Amid high spirits, drumming, dancing, singing and praying, white flowers will be released into the Mississippi River in honor of ancestors, as participants call the names of their relatives and friends who have passed on.

Upon exiting the Canal Street Ferry in Algiers, the Spirit of the FiYiYi Mardi Gras Indians will greet the procession and lead members into The Village at King’s Plantation in Algiers Point. This beautiful African village on the west bank of the Mississippi River, once owned by the Company of the Indies in 1700s, was a site where enslaved Africans, fresh off slave ships, were held until they were sold at auction. At this location, the Consulate of Venezuela in New Orleans will present the folkloric Afro-Venezuelan women drum group, Elegua. In addition, the Taiko Jazz Drummers, poets, and dancers will perform.

The Maafa continues from 11:00 a.m. to 3:00 p.m., with breakfast and entertainment at Ashé Cultural Arts Center, 1712 Oretha Castle Haley Blvd. in Central City New Orleans. The day’s activities include spoken word, dance, and music. There will also be intergenerational celebrations and discussions around topics of racial healing and unity.

The Maafa commemoration offers an opportunity for the whole community to pause and reflect on this great transgression against humanity and to personally, as a community, agree to distance ourselves institutionally in word and deed from that transgression, its legacy and the will to continue its evolved practice of racism in our civic, social, spiritual and personal lives.

Community support for the Maafa continues to grow, and includes sponsorship from Ashé Cultural Arts Center, The City of New Orleans, The Consulate of Venezuela in New Orleans, The Institute for Black Catholic Studies at Xavier University, The People’s Institute for Survival and Beyond, The Village in Algiers (the Ovah Da River Folklife Village), the Backstreet Museum, and New Orleans Youth Slam (NOYS). The Maafa is partially funded by The Kellogg Foundation (America Healing), The Ford Foundation, and the Nathan Cummings Foundation.

Comments:
Give Thanks; Ashe!

This information is very useful. thank you for sharing. and I will also share information about health through the website

Thanks for sharing the information

Thanks for sharing the information

Your article had provided me with another point of view on this topic. I had absolutely no concept that things can possibly work on this manner as well. Thank you for sharing your opinion