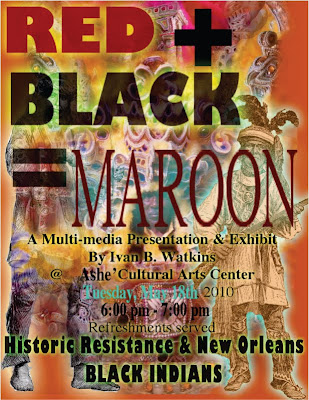 Ivan B. Watkins is an internationally recognized artist, filmmaker, and ethno-historian, born and raised in New Orleans. He is a graduate of NOCCA, the School of the Art Institute of Chicago (BFA) and University of Chicago (MA-Social Science) and is completing a Doctoral Dissertation “African American Indian Uprisings and the Black Indians of New Orleans Carnival.”

Ivan’s Documentary films in varying stages of completion include: ZAMBO – African and Native American Cultural Survival, “The Blackheart Man” – exploring the theme of self-sacrifice in folk heroes and leaders, “Success in the Making” – a biographical portrait of TRU Records visual artist Kernell Reynolds and the emergence of Gangsta Rap entrepreneurship, as well as a video memorial to the survivors and victims of Hurricanes Katrina and Rita.

The article is very interesting. And I also want to share articles about health, I'm sure this will be useful. Read and share it. Thank you very much :)