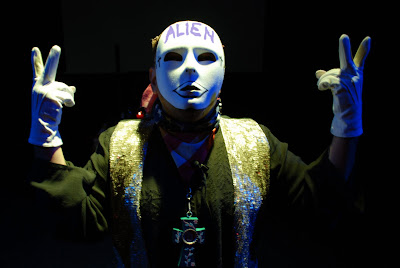 New Orleans multidisciplinary visual and performance artist José Torres-Tama has received a National Performance Network Creation Fund Award for the commissioning of a new performance theater piece called ALIENS, IMMIGRANTS & OTHER EVILDOERS, which explores the rise in hate crimes against Latinos and the criminalization of immigrants across the country. The $12,000.00 award will fund the development of ALIENS at the three cities of the commissioning partners.

The commissioning theatres are MECA in Houston, GALA Hispanic Theatre in Washington, D.C., and the Ashé Cultural Arts Center in New Orleans. From March 22 through April 30, Torres-Tama will begin the creation process, and he will visit each city to research how the immigration debate is perceived. Working with a local filmmaker in all three cities, he will interview members of the general public on the streets and ask the questions: "Since the Pilgrims arrived without papers, why were they not immediately deported, and where were was immigration then?” Some responses will be inventively fused into short film excerpts that drive the performance narrative. Also, he will perform a work-in-progress version of ALIENS in each city during the creation process to serve as a catalyst for community input on the immigration issue.

ALIENS will be performed with a sci-fi Latino noir aesthetic, bilingual texts, and multimedia staging strategies. Appropriating the sci-fi look of the film The Matrix, Torres-Tama transforms and shape-shifts into numerous Latino "aliens" who challenge the flaws of a country built by immigrants that vilifies the same people whose labor it exploits. One exaggerated character is “El Bravo”, an immigrant superhero who battles bilingually challenged minutemen at the border and outs hypocritical politicians who stump against undocumented immigrants while hiring “illegal aliens” to literally do their dirty laundry, watch their kids, and clean their houses.

“Receiving the NPN Creation Fund Award is the highest honor I have received to for my performance work, and it marks the first time I have commissioning funds to assist with the creation of a new piece,” states Torres-Tama.

About the artist: José Torres-Tama is an award-winning interdisciplinary artist working in poetry/fiction, visual art, and performance art. For twenty years, he has worked in the New Orleans arts community, and since 1995, he has toured nationally and internationally with his multimedia performances. A Louisiana Theater Fellow and NEA award recipient, his critically acclaimed post-Katrina solo, The Cone of Uncertainty, documented his dramatic escape on a stolen school bus after the levees breached. After four years of touring The Cone nationally, he received a 2008/09 Louisiana Division of the Arts Grant to debut the piece in London, Liverpool, and Aberystwyth, Wales, as part of his 2009 international tour profiled in American Theatre’s March ’09 issue. Also, he is the recipient of a 2008 Joan Mitchell Foundation Award for the publication of his first art book titled New Orleans Free People of Color & Their Legacy, which documents his pastel portraits of 19th century Creoles recently exhibited by the Ogden Museum of Southern Art in New Orleans. www.torrestama.com

Torres-Tama is both a versatile writer who can be lyrically evocative as well as bitingly humorous, and an impressive performer. ---The Philadelphia Inquirer

About the National Performance Network (NPN): The NPN is a group of diverse cultural organizations, including artists, working to create meaningful partnerships and to provide leadership that enables the practice and public experience of the arts in the United States. NPN annually leverages $3,000,000 in financial support for the creation and touring of contemporary performance work. The NPN is supported by the Doris Duke Charitable Trust Foundation, the National Endowment for the Arts (a federal agency), the Ford Foundation, the MetLife Foundation, the Nathan Cummings Foundation, the Lambert Foundation, and the Andrew W. Mellon Foundation. The NPN offices are located in New Orleans at 866 Camp Street. www.npnweb.org

In addition to the NPN Creation Fund, José Torres-Tama has received a grant award from the Atlanta-based arts organization Alternate ROOTS (www.alternateroots.org) for the community outreach portion and production of ALIENS, IMMIGRANTS & OTHER EVILDOERS at the Ashé Cultural Arts Center in New Orleans.

The Community Arts Partnership Project (C/APP) grant award adds $2,500 for the New Orleans debut of ALIENS at the Ashé Cultural Arts Center in September 2010. These funds will be used to reach out to the Latino immigrant community in New Orleans that has been part of the post-Katrina reconstruction. As part of the project, Torres-Tama will document stories concerning the various experiences immigrants have had since the storm.

“The greatest dirty little secret of the reconstruction of New Orleans is that it owes a huge debt to the Latino immigrant labor force brought in to rebuild after the storm, but ‘the city that care forgot’ has never officially cared to acknowledge the contributions made by the thousands of Latino immigrants who have been invaluable to our recovery,” states Torres-Tama.

The New Orleans ALIENS research calls for the artist to interview and film immigrants who have remained and were part of the reconstruction. Some of these stories will be used to inform the ALIENS performance script. In July of 2009, the Southern Poverty Law Center released the analysis of a study that stated that up to 80% of immigrant laborers in post-Katrina New Orleans were cheated out of their pay by ruthless contractors and local businesses.

Torres-Tama has contributed commentaries to NPR’s Latino USA that explore these issues, and he hopes that ALIENS can explore the personal stories of immigrant laborers further.

Comments:
i visited your site and it was good enough than othere site that i visited before.

Good Job, I am happy to find this well Pages

Its my chief all together to enter on this forum,just wannat make some friends here.if its not allowed to record on this food,please delete this thread.Nice to adjoin you!

An excellent set of shoes, perhaps not some of the most gorgeous, not the highest price tagged, neither is the symbol name, it also requires you to ultimately tour everybody, Christian Louboutin Sale
resolve benefit from ipod happiness shoes fail to fit, perhaps enviable,however, the injured indeed.http://www.getasicsaustralia.com
A really situation you should have encountered, walked vertical jump prior to the showcases in countless various kinds of shoes the truth is dazzling, not to consider. Market price is in line is absolutely not beautiful, like expensive, comfortable transparent fashion, feel good-looking individuals think old-fashioned ... for being completely contented with simply difficult. Pick to pick, finally selected a pair, wear a short time realise foot wear, or no way to their clothes,http://www.mislouboutinaustralia.com
how to attempt this time? Which gives up'd rather painful to need to wear?