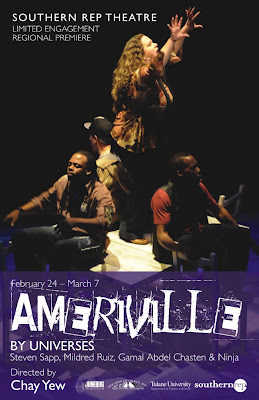 New Orleans — Southern Rep, Junebug Productions, Ashé Cultural Arts Center, and Tulane University Department of Theatre and Dance present AMERIVILLE by Universes, which runs February 24 – March 7, 2010. Opening night is Wednesday, February 24th. Performances continue through March 7th, Thursdays through Saturdays at 8 p.m. and Sundays at 3 p.m. Tickets for this LIMITED RUN are on sale now from $20 - $35 and may be purchased at (504) 522-6545 or www.southernrep.com.

In AMERIVILLE, the critically acclaimed Bronx-based ensemble group gives an emotionally riveting performance that is not only about Katrina, but also about the struggles and heartbreaks that happened in New Orleans. With the unbelievable power and passion that Universes brings to the stage, stories, facts, and memories are brought back through a mixture of poetry, hip-hop, jazz, and theatre.

Ameriville is an experience on many levels: percolating, bubbling, and broiling, flooding the theatre to the very last row. Hold your breath and dive in. - Theatre Louisville

Southern Rep Artistic Director Aimée Hayes was drawn to this wide-reaching partnership out of a shared belief in the power of Universes' production.

When I saw AMERIVILLE in last year’s Humana Festival, I jumped to my feet along with the rest of the audience to applaud before the lights came down at the end of the show. After seeing a production that spoke to my hometown in such a ground-breaking and inspirational way, I knew we had to find a way to bring it here to share with our friends and neighbors. – Artistic Director, Aimeé Hayes

Created by Universes, AMERIVILLE gives new insight and urgency to our national re-examination of what it means to be American - with heart, impassioned stomps, and incandescent harmonies. It’s a jubilant cry to rebuild America itself. Universes has created their own brand of high-energy performance, rooted in hip-hop but drawing on a global multitude of lyrical and musical influences and performance styles.

It's the performers -- fierce, funny and bitingly intelligent -- who keep your toes tapping and your heart in your mouth. All are prodigiously versatile, handling the demands of the piece -- from dance to song to sound effects to tongue-twisting patter monologues -- with consummate professionalism and aplomb.- Los Angeles Times (Slanguage, 2004)

AMERIVILLE will be directed by Chay Yew, who is both a director and award-winning playwright, currently living in New York City. He has directed countless shows and is a recipient of the Dramalogue and OBIE Awards for Direction. As an alumnus of New Dramatists, he currently serves on the Executive Board of the Society of Stage Directors and Choreographers. Yew is a graduate from Boston University.

Steven Sapp, Mildred Ruiz-Sapp, Gamal Abdel Chasten, and Ninja make up Universes. All four actors are the founders of the company. Steven Sapp, a graduate from Bard College, is a playwright/actor. Mildred Ruiz-Sapp is part of this group as a playwright/actress/vocalist. Gamal A. Chasten is a songwriter/poet/screenwriter whose work has toured in over 25 U.S. cities and 5 countries. Ninja (William Ruiz) is a playwright/director and also a graduate of Bard College. Universes is a National / International ensemble Company of multi-disciplined writers and performers who fuse Poetry, Theater, Jazz, Hip-Hop, Politics, Down Home Blues and Spanish Boleros to create moving, challenging and entertaining theatrical works. The group breaks the bounds of traditional theater to create their own brand, inviting old and new generations of theater crafters as well as the theater goers and new comers to reshape the face of American Theater.

Southern Rep is proud to be part of this expansive partnership project with Junebug Productions, Ashé Cultural Arts Center, and Tulane University Department of Theatre and Dance that brings together such a diverse group of stakeholders, including school principals, teachers, members of the media, church and business leaders, as well as organizations’ board members to ensure the widest possible impact of Universes’ work in New Orleans. Thanks to the support of the National Endowment for the Arts, Louisiana Division of the Arts, Arts Council of New Orleans, New Orleans Jazz and Heritage Foundation, and the National Performance Network, Southern Rep sees AMERIVILLE and Universes’ residency as fruitful and productive endeavor to benefit the New Orleans community at large.

Junebug Productions (JPI,) a professional African American arts organization located in New Orleans, Louisiana, produces, tours and presents high quality theater, dance and music that encourages and supports African Americans in the Black Belt South who are working to improve the quality of life available to themselves and others who are similarly oppressed and exploited. For the past 29 years, the company has toured the U.S. and performed internationally with John O'Neal, Junebug's Artistic Director who co-founded the Free Southern Theater in 1963 as a cultural arm of the southern Civil Rights Movement. Junebug Productions is currently creating the Free Southern Theater Institute (FSTI) to codify the particular techniques, ethics, and aesthetics developed by FST and Junebug Productions. Artists from around the region and the nation will be able to come to New Orleans, learn the FST and JPI technique and work with the local community and artists. Junebug is currently offering the third of three pilot program courses, "From Community to Stage," bringing in artists to work with community residents, high school and university students.

Ashé Cultural Arts Center is an effort to combine the intentions of neighborhood and economic development with the creative forces of community, culture and art to revive and reclaim a historically significant corridor in Central City New Orleans: Oretha Castle-Haley Boulevard, formerly known as Dryades Street. Ashé is a gathering place for emerging and established artists to present, create and collaborate in giving life to their art so as to activate the artistic, creative and entrepreneurial possibilities available in our community. Storytelling, poetry, music, dance, photography, and visual art all are a part of Ashé’s work to revive the possibility and vision of a true "Renaissance on the Boulevard."

The Tulane Department of Theatre and Dance is a multi-disciplinary program that offers a fusion of performance styles and techniques in the framework of a liberal arts setting. Their diverse and international faculty teaches a mix of approaches that allow their students to explore all aspects of the theatrical and dance arts in order to help them prepare for the world around them. After beginning with the solid foundation of a hands-on curriculum, students are allowed to individualize their journey by choosing study in numerous areas that include academic research, storytelling, regional and international dance styles, acting methodology, community action, directing, choreography, design and technical stagecraft. The Department’s goal is to create the beginnings of a well-rounded dance or theatrical artist who understands where she or he fits into a larger performance community.

Southern Rep celebrates its 23rd season as the region’s premiere professional theatre, continuing to produce bold world and regional premieres under the artistic leadership of Aimée Hayes, with Managing Director, Marieke Gaboury. In addition to its exciting Mainstage offerings; Southern Rep continues to offer educational programs such as free student matinees, $10 student rush tickets and Academy SRT; “Free Night of Theatre”; as well as providing an artistic home to new works in development in the New Play Bacchanal.

Southern Rep continues to show that it is staging the most important, challenging, and downright mesmerizing pieces of theater New Orleans audiences are graced to experience. - Theodore P. Mahne, The Times-Picayune Lagniappe

TICKETS AND LOCATION: Regular ticket prices range from $20-$35: $35 for Opening Night, Wednesday February 24 (includes post-performance reception); Individual tickets are $26-$29 with special discounts for students, seniors, K-12 teachers, active military, theatre professionals (with ID) and groups of ten or more. $10 Student Rush tickets are available 15 minutes before curtain on a cash-only basis, with student ID. On the edge of the French Quarter, Southern Rep Theatre is conveniently located on the 3rd floor of the Shops of Canal Place, where validated parking is available. For more information and to order tickets, call (504) 522-6545, or visit southernrep.com.
###

Southern Rep Theatre is an NPN Partner of the National Performance Network (NPN). This project is made possible in party by support from the NPN Performance Residency Program. Major contributors of NPN include the Doris Duke Charitable Foundation, Ford Foundation, the National Endowment for the Arts (a federal agency), the MetLife Foundation and the Nathan Cummings Foundation.
# posted by Ashe Messenger @ 5:01 PM