"RED BEANS AND RICELY YOURS" 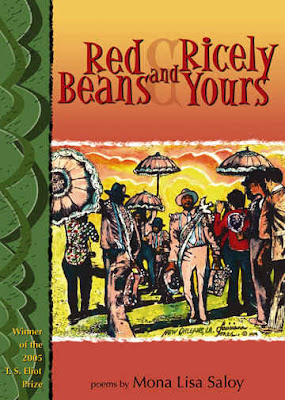 Mona Lisa Saloy will sign her book entitled "Red Beans and Ricely Yours."


"These narrative poems tell the day-to-day lives of Black New Orleans and the rare magic in the culture. Vibrant with local history and color, these poems have a Black sensibility that reaches beyond boundaries, with folk sayings turned into polished verse. From Black talk to verse forms, Mona Lisa Saloy never loses sight of the African American cultural roots of her community. She makes music in verse." (http://www.amazon.com/gp/product/1931112533/ref=nosim/?tag=chickenajourn-20)

About the Author
Mona Lisa Saloy is currently an Associate Professor of English, Director of Creative Writing at Dillard University, and a Doctoral Candidate at LSU in English and Anthropology. Ms Saloy won fellowships from the National Endowment for the Humanities and from the United Negro College Fund/Andrew W. Mellon Foundation to continue her research on Black Beat poet Bob Kaufman, who served as an important link to the Black arts movement. She received the M.F.A. at Louisiana Sate University in Baton Rouge, the M.A. in Creative Writing at San Francisco State University, and the B.A. at the University of Washington in Seattle.
Some of Mona Lisa Saloy's poems appear in Immortelles, Poems of Life and Death by New Southern Writers, New Orleans: Xavier Review Press, 1995, and in 1994 The Southern Review. She is featured in The American Poetry Archives' Color: A Sampling of Contemporary African American Writers, 1994. Others include Louisiana English Journal, 1994; African American Review, 1993. She is in the seminal Louisiana Women Writers, New Essays and a Comprehensive Bibliography, edited by Brown and Ewell, from LSU Press, 1992. Ms. Saloy's previously published poems appear in the following: Word Up, Black Poetry of the 80s from the Deep South, The Black Scholar, The Haight Ashberry Literary Journal, Dark Waters, Testimony, Louisiana Laurels, and others.
Previous awards are the 1993 Delta Sigma Theta's ARTIE, and the 1989 "Arts Excellence Award" in literature; in 1984, a National Endowment for the Arts supported post as Poet-in-Residence at the San Francisco African American Historical and Cultural Society. Mona Lisa Saloy was a Poet-in-the-Schools in Washington State, California, and Louisiana where she developed the successful Arts in Education program for the Arts Council of Greater Baton Rouge. In addition, she has collected and published folklore research on kids' lore and adult male lore in Louisiana and Michigan. Mona Lisa Saloy is on the Advisory Board of the Tennessee Williams/New Orleans Literary Festival.
Mona Lisa says that she writes to speak for those who don't, to learn their lessons, and to celebrate their spirits.
# posted by Ashe Messenger @ 3:39 PM