Markrois' Schizophrenic is On Again 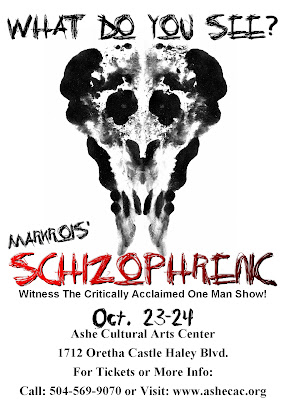 Markrois, a 24 yr. old Louisiana native, will bring his Schizophrenic World Tour to New Orleans on September 18 and 19, 2009. The groundbreaking, one-man show will play at the Ashé Cultural Arts Center. This is the final stop on the Schizophrenic Tour, which has played to sell-out crowds in twelve cities, and it marks the first time Markrois will perform in his hometown of New Orleans since Katrina.

Markrois’ Schizophrenic is an innovative mix of drama, suspense and dance designed to keep audiences on the edge of their seats throughout the entire theatrical journey. The production takes patrons deep into the mind of former firefighter Marcus Walker in an attempt to solve his wife’s murder case. During the production audience members get to play detective and use clues given throughout the show to help solve the crime.

This show is for mature audiences only.

Comments:
if you are interested in golf and want to enjoy the golf with luxurious holiday then our community is the best option for

you. because golf holidays in spain offers you the best golf courses in all

over the world. here you can find the respected environment for golfing. we also provide you the best hotels and restaurants

for your holidays.for more informations you have to visit our link which is given above